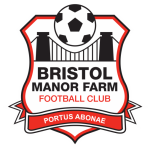 Bristol Manor Farm 2 Bideford 1
There were huge cheers for the home side at the end of this tight, scrappy affair
as Bristol Manor Farm earned their first victory of 2020.
Farm almost took the lead in the 9 th minute when left-back Mason Winter did
well to get a cross in from the left and Lewis Leigh-Gilchrist thumped a header
off the crossbar. Leigh-Gilchrist also tested Liam Kingston in the 16 th minute,
shooting as he went to ground and the Robins keeper smothering low to his
right.
The Portwaymen had to wait until the 33 rd minute however before getting their
noses in front. It was defender Lloyd Mills who rose highest in the box to head
in a Jordan Metters corner.
Bideford had a better start to the second half, drawing level in the 58 th minute
when after a melee in the box Ben Wood gleefully smashed home from close
range.
Manor Farm now came under increased pressure with Iain Harvey heading off
the line in the 61 st minute and goalkeeper Andrew Collings producing a great
diving stop to deny a firmly hit long range effort.
Jordan Metters then had a great opportunity to seal the points for the Farm when
he ran on to a good flick from Alan Griffin but lifted his shot over both the
keeper and bar.
The points were finally sealed in the 81 st minute when Leigh-Gilchrist ran
through before coolly slotting the ball past Kingston and Griffin made a crucial
headed clearance at the back post in the final minute of the game.
STAR MAN (Lloyd Mills, Bristol Manor Farm)